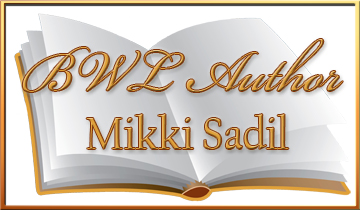 Mikki Sadil is the author of four books and more than thirty short stories and non-fiction articles, all for kids from ten to sixteen has had a passion for writing since she was ten years old and had her first set of poems published, and that passion has continued her whole life. Mikki lives in a small Victorian town on the beautiful Central Coast of California. " 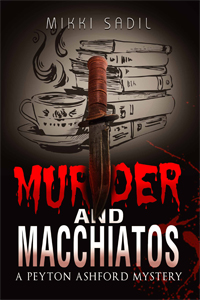 Peyton Ashford is a law professor who has inherited an old barn which she and her husband, Cooper, city District Attorney, have turned into the Old West designed Books and Brews Bistro, a coffeehouse. Peyton and her two best friends, Willow and Kylie, become amateur detectives out of sheer necessity when the Sheriff, Matt Taylor, either refuses to investigate crimes  or is so incompetent he can't do the job properly.Peyton and her friends solve different types of crimes, mostly in this small town of Dauphin's Cove, Connecticut, which used to be the whaling capital of Connecticut. Along the way, Peyton runs into various difficulties of her own, both in her family and amid friends from past and present.

The body belongs to Peyton's great-uncle, whom she has not seen since childhood. The Sheriff declines to investigate so Peyton enlists the help of her two best friends, Willow and Kylie, to help her solve the murder. Strangely, this murder happened in the exact same way as the murder of her great-great grandfather, over 100 years ago. Along the way, a teenage girl mysteriously disappears and her parents refuse police help in finding her, but Peyton is determined to do so. A mysterious explosion destroys the teen's home, and searchers find the body of her brother...not killed in the explosion but murdered.

A competitive law professor and a Federal Drug agent become involved, determined to prevent Peyton from solving these crimes, especially that of her great-uncle. Fake art reproductions, hundreds of thousands of dollars fraudulently acquired, a stolen antique scrimshaw, a deadly lab, and the interference of a strange woman all add to Peyton's problems in trying to solve the worst and most unusual crimes the small town of Dauphin's Cove had ever seen. 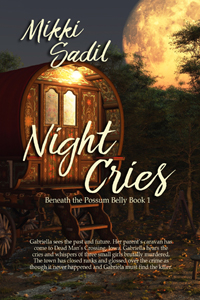 Cries in the night. Whispers against her cheek. Sixteen year old psychic, Gabriela Gaudet, is awakened night after night by crying and sobbing voices. Children’s voices.

The traveling carnival that Gabriela’s French-Creole parents own has come to the small town of Dead Man’s Crossing, Iowa. Now the cries and whispers have become loud and pleading. Three small girls. Their brutal murder. An entire town closed ranks and glossed over this terrible crime as though it never happened five years before. It’s up to Gabriela to find the killer, and put the children’s souls to rest.

Remi, a handsome young man who appears out of thin air, and disappears just as fast, meets Gabriela and become her partner in seeking justice. But there are strong forces in the town that want her gone. Just as strong are the forces that want her to stay and finish her mission. Then, there are the six gargoyles in the lobby of the high school who apparently come to life after dark, and the six women in the high school office who look perfectly normal…if you don’t count the tall, cone-shaped and brightly colored witch’s hat each of them wears.

“Accidents” harass the carnival. Danger stalks Gabriela with every step she takes. A web of evil surrounds the town, and threatens to draw her into its sticky strands. Will her powers be strong enough to fight off this malevolence, or will the town win again? The Possum Belly waits. 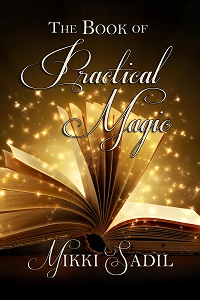 Trouble just seems to follow Lily Leticia around…with only a little help from her. Now, however, Lily Leticia has found an old book, one that her Indian friend, Joseph Spotted Elk, has told her to put back immediately in the trunk where she found it. He claims there are Indian spirits in the book, that it is ancient magic, and she should not even be touching it. Magic? Combined with an IQ higher than most of her teachers? This is right up Lily Leticia’s alley! If she ever thought she was in Trouble before The Book, it was nothing compared to the Trouble she’s going to be in. 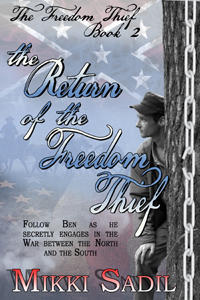 It is 1861, and the aspect of a Civil War between the North and South is quickly becoming a reality. When Ben McKenna returns home to his grandmother’s Kentucky plantation, after being gone for almost a year helping his best friend, a crippled slave, and his parents escape from slavery, he is met with anger, resentment, and even hatred from his parents and two older brothers. Only his grandmother, a not-so-secret Abolitionist, is happy to see him.

When the Civil War is declared, his brothers join the Confederate Army, and Ben decides to become a spy for the Union Army. His grandmother sends him to a lady friend in Lexington who runs an espionage ring, and his troubles begin. When his first mission is hampered by a young girl, Puck, who attaches herself to him, he is afraid his future spying activities will be compromised, but she becomes a loyal ally.

At first, Ben works as a newsboy, since they are welcomed into both Confederate and Union camps, and Puck follows along with him, pretending to be his sister. But when he becomes an agent with the espionage ring, his missions become so dangerous that he must leave Puck behind. He embarks upon a journey already deeply mired in danger, deceit, and deception.

Every mission, every move he makes, is a distinct threat to his life, and he often wonders if he will ever return home. Follow Ben as he secretly engages in the War between the North and the South, and as he realizes, perhaps too late, that his own survival is not guaranteed. 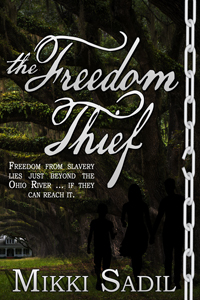 Before the Civil War exploded in the South, thirteen year-old Ben McKenna was fighting his own war against slavery, on the hemp plantation in Kentucky where he lives.

His best friend, a crippled slave boy, Josiah, was about to be sold by Ben’s father, and Ben decided to stop that sale by planning an escape for Josiah and his slave parents.

When the buyer for Josiah arrived early, Ben realized the escape had to take place that very night. Without any kind of plan, or even a map, Ben and Josiah and his parents, Bess and Jesse, embarked upon a journey to find the Ohio River and the freedom that lay beyond for slaves. Instead, of help along the way they found hostility, danger, and deception, in a quest that almost cost their lives.

Plagued with fear, hunger and exhaustion, they are on the run from slave hunters and their dogs -- dogs that followed their scent no matter what they did to disguise it. Hidden barns, tiny attic rooms, cellars full of rotting fruit and vegetables were their only means of safety.

After each brief stay they had to leave and run again. Treachery seemed to be the name of the game, and Ben was never sure if they were ever going to find the safety and freedom of the Ohio River.